Last week a Swedish healthcare delegation, headed by the Swedish Minister for Health and Social Affairs, visited Addis Abeba, Ethiopia. A delegation trip to Ethiopia had been in the planning for a long time, but the timing has never been better than now.

A large market with a growing middle class, strong economic growth, good historical relations to Sweden and government focusing on improving healthcare were the reasons behind the decision. The Noble Peace prize being awarded to Prime minister Abiy Ahmed just a few weeks before our delegation just made it all feel even more right in time. 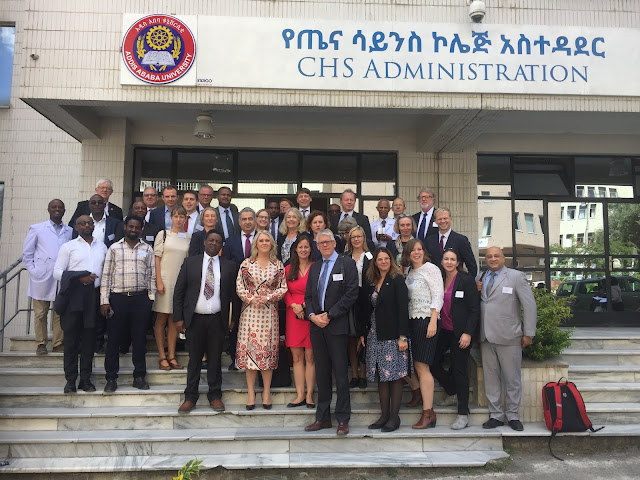 A group of 37 delegates led by our Minister for Health and Social Affairs, Lena Hallengren joined this triple helix delegation. This included representatives from three government agencies; the Public Health Agency, the Medical Products Agency and the National Board of Health and Welfare, and one academic institution, Karolinska Institutet.  Along came seven companies; Arjo, AstraZeneca, Atlas Copco Medical Gas, Elekta, Getinge, Human Bridge and Mimer Medical. The delegation was co-organized by Swecare, the Embassy of Sweden in Addis Abeba, Business Sweden in Nairobi, the Ministry of Health and Social Affairs along with the Ministry of Foreign Affairs. 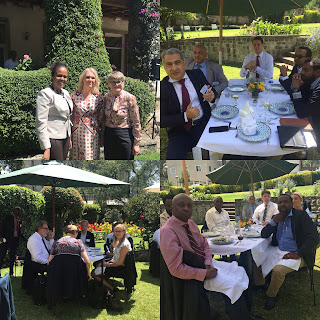 We had a few intense and efficient days. The first day was planned to set the scene of the Ethiopian health care sector starting with a study visit to Black Lion Hospital, the country´s oldest referral hospital with large expansion plans. After a joint introductory meeting, the delegation was divided in three groups to visit the Pediatric emergency, Department of Pediatrics and Child Health and Oncology/Cancer center.  After the visit to the hospital, which is just across the street from the Swedish Embassy, we had a working lunch in the garden of the ambassador´s residence with the Ethiopian Food and Drug Authority. Their Director General Heran Gerba explained the role of their agency as an entry point for all companies in the sector to enter the market and that their new proclamation from February 2019 is now being put in place to enable a smoother registration for companies. She also mentioned that a digital registration is rolled out to smooth things further. The lunch continued with one-to-one questions from the companies to her colleagues while she sat down with the Director General of our Medical Products Agency and discuss possible collaboration. 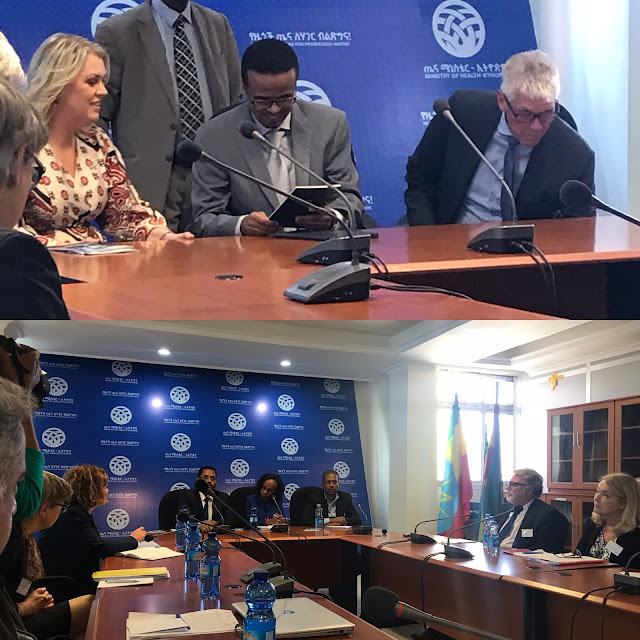 The last meeting of the day was at Ministry of Health with the Minister of Health Dr. Amir Aman to listen in on his plans and thoughts about the status of the Ethiopian health system challenges and opportunities. We got a nice surprise at 3pm when we were all asked outside and had a small exercise/stretch together with ministry staff. This is part of the daily routine at the Ministry. After the break we got presentations from several department heads on their responsibilities and agenda for the future.
The day ended with a reception at the ambassador´s residence with a mixed crowd of international organizations, health care professionals and international NGO´s. 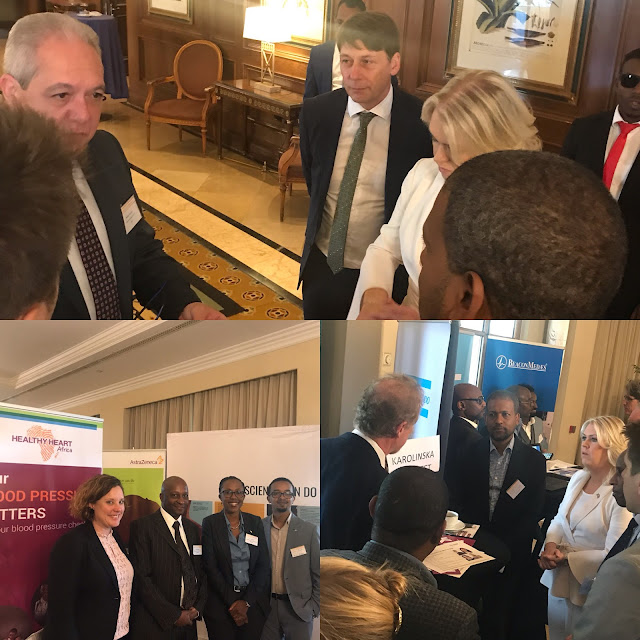 The second day´s main event was our conference Sweden - Ethiopia Health Care Conference: Public and Private Cooperation for a Sustainable Health System. The event was held at Sheraton Hotel and gathered more than 90 attendants. The conference took off with welcoming remarks by Mr. Torbjörn Pettersson, Ambassador of Sweden to Ethiopia, followed by Dr. Munir Kassa  from the Ministry of Health (stepping in for Minister Dr. Amir that was called in to another meeting last minute) and  the Swedish Minister for Health and Social Affairs, Ms. Lena Hallengren. This set the scene of the conference with the context of the Swedish and Ethiopian health care and global challenges that we have to combat together. 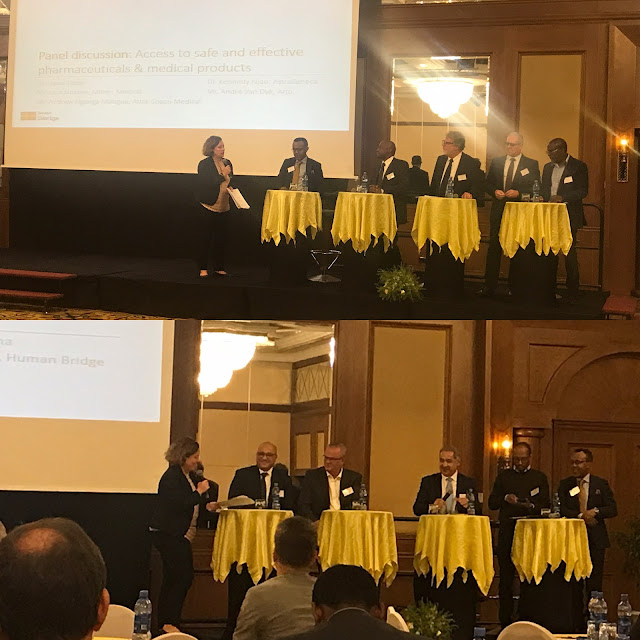 Dr. Johan Carlson, Director General, Public Health Agency of Sweden was the next speaker and talked among other things about anti-microbial resistance, the disease burden in Sweden and how it differs with level of education. Dr. Carlson concluded with some words about the Sustainable Development Goals, and especially goal no. 3 on Good health for all at all ages.

After coffee break and an VIP tour of the company expo for the two ministerial representatives, the morning continued with interesting presentations from the participating Swedish government agencies and their Ethiopian counterparts on the health system topics of Access to safe and effective pharmaceuticals & medical products, Access to good health and care for all; the importance of data and guidelines and Access to knowledge and know how, each followed by a panel discussion by the participating companies and Ethiopian speakers.

The Conference ended with a delicious networking lunch, during which a lot of interesting discussions regarding the Swedish solutions presented, and the challenges in Sweden and Ethiopia took place. 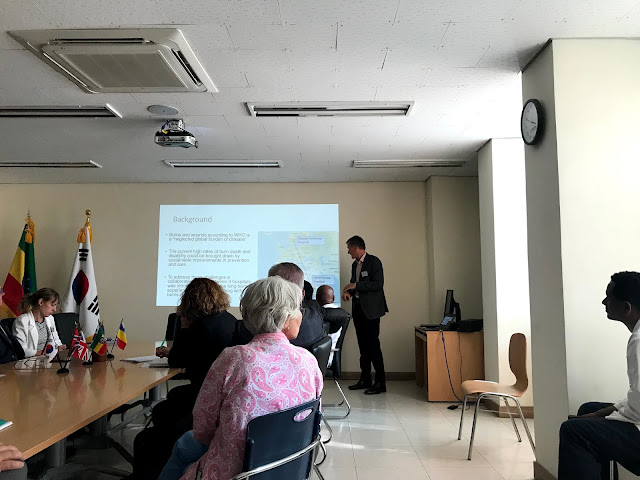 After lunch, the business delegation went on to MCM General Hospital, which collaborates with the Nordics for their burns treatment unit. We met among others the general manager Dr. Young Dae Kwon and Dr. Morten Kildal from Akademiska hospital in Uppsala, who visits regularly, and learnt about their inspiring model for collaboration with regional hospitals to improve burns care in Ethiopia. 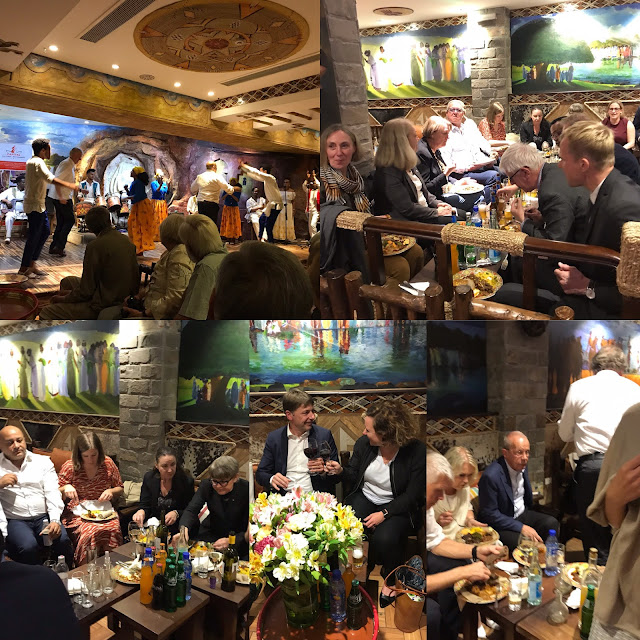 As the last thing on Tuesday evening we had a quick summary meeting with Minister Lena Hallengren and then went to the cultural restaurant at Capital hotel were the delegation had a nice Ethiopian buffet and was entertained by Ethiopian music and dance – some of us even got to try dancing. 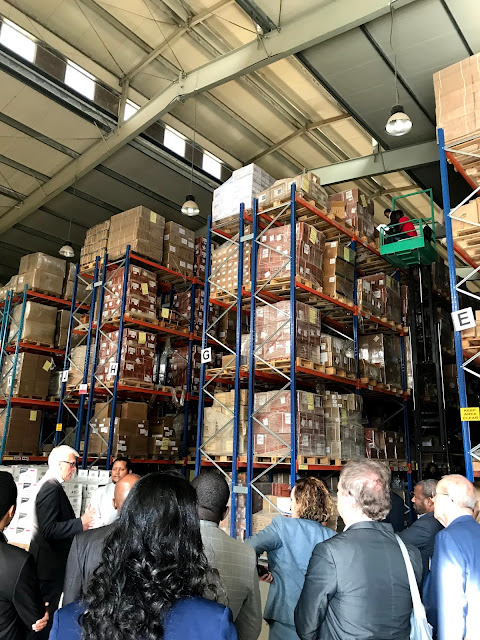 Ethiopian Pharmaceutical Supply agency received us on the third day and showed us their warehouse where we had a Q&A session with Mr. Tesfalem, EPSA's Deputy Director General for Outbound Logistics

Across the street from EPSA is St Paul's Hospital that was our second meeting of the day. The visit started with a presentation on the hospital and their expansion plans, followed by study visits to different departments.

Lunch was combined with a wrap-up session to hear what the participants thought of the program, and how they will follow up the leads they have gotten during the delegation. 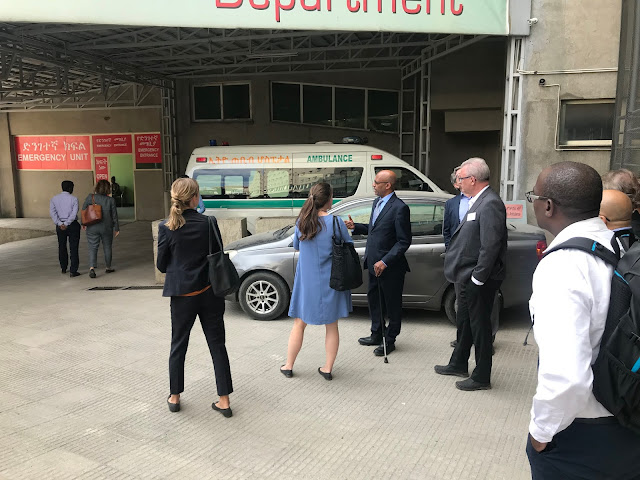 From the wrap-up meeting we know that the participants got valuable insights and many contacts for possible collaboration and business to follow up on. The next step for Swecare will be a follow-up meeting in Stockholm at the end of January/begining of February next year to check what progress has been made and understand how we can further assist in deepening the collaboration with Ethiopia.