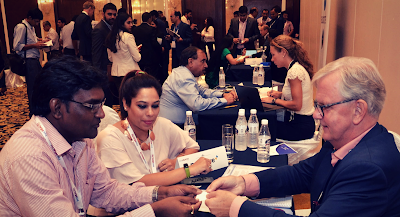 1. You have to be excited to be there. If being in India does not make you happy then it will be very hard to motivate yourself and your team to invest time and money necessary to succeed in the Indian market. Two of the participants woke up at 2am to visit the Taj Mahal from Delhi (+3hrs one-way by car) before their 11am meetings with agencies and distributors. This passion speaks for itself, and the Indian counterparts are much more likely to go an extra mile (in this case quite literally) if you show that you are doing so yourself.

2. A physical presence is extremely important. Most people will actually want to meet you first and then take it from there. If, in the Swedish manner, you try to book meeting weeks in advance with a set agenda, the response is unlikely to be overwhelming. One of our Swedish delegates was so concerned with what she saw as a lack of planning that she "almost didn't come, [...] but there were so many good meetings that were unprepared!" She booked her ticket days before this CBHA trip and was not disappointed.

3. When your extremely talented and dedicated local coach tells you to take an Indian SIM card, listen to him. I regretted not having taken an old phone with me as many of my texts did not go through and data connectivity was patchy at best. There was no WiFi at the conference venue which made it difficult to follow-up and set-up meetings with the leads one had just met, an Indian number would have made life much easier.

4. Use Whatsapp - one of the representatives of a government regulatory body said that he is unlikely to ever answer an email as he is constantly running between meetings and stuck in traffic (many official domains are inaccessible on the mobile). Get potential partners' mobile numbers and use them.


The third installment of the Central Baltic Health Access project consisted of three days in Delhi and two days in Bengaluru over the third week in September. The sheer variety of meetings we managed to fit into these few days is nothing short of impressive. For this we have Sachin Gaur and his team at InnovatioCuris to thank. I believe I speak for all participants - six from Sweden, five from Estonia, and four from Finland - when I say that it was a productive trip. Company mission reviews have started to come in and we will book in coaching meetings over the next few weeks in order to ensure follow-up, but the general feeling, even after two days in Delhi, was that many promising connections have been made - with distributors, clinics, hospitals, start-ups, research institutes, regulatory agencies.

We were also privileged to have hands-on support from both the Estonian and Swedish Embassies in Delhi. The Ambassadors spent a considerable amount of time with the companies, in order to understand the needs, challenges, and expectations of each representative. This type of local support is key for success in foreign markets. In fact Swecare is already in talks with the Embassy, Business Sweden, InnovatioCuris, Confederation of Indian Industry (CII), and Federation of Indian Chambers of Commerce & Industry (FICCI) to explore the option of making this type of business-focused trips a regular event. If you are interested in this form of deep engagement, do let us know!

Before signing off, I leave you with some few points I have pondering over since the trip.

- If the diagnostic test costs more than the 'cure,' often antibiotics, wouldn't you too just take the latter?
- How to tackle the aging challenge, which the Indian healthcare system is only now coming to see as a threat?
- Can our products be price-competitive when there is such heavy tax imposed on imports into India? Is manufacturing there a viable option?
- When it comes to product tests, must the companies fund the research themselves, or are there easily available funds in Sweden? The Indian research agencies have such funds for the work being done on their end but cannot finance the Swedish engagement, making the PPP project less tenable.
Upplagd av Swecare Foundation kl. 14:58